We are please to announce that Hour 2 of Still Singing the Blues, called “Crescent City Blues,” has been posted to the web site of Public Radio Exchange (prx.org). You can listen online at http://www.prx.org/pieces/53509-crescent-city-blues, but you first must register for a free membership at PRX.

It will debut Sunday, Sept. 26, at 6 p.m. Central Time on Northern Public Radio. The flagship station is WNIJ (89.5 FM, DeKalb), the broadcast service of Northern Illinois University. It will also air on three stations that share WNIJ’s programming: WNIW (91.3 FM, LaSalle), WNIQ (91.5 FM, Sterling) and WNIE (89.1 FM, Freeport). You can listen live at http://www.wnij.org. The broadcast will be part of Free Range Radio, a weekly show that features documentaries and other specials from around the world.

“Crescent City Blues” takes listeners to the hidden world of New Orleans corner joints—bars far from the French Quarter, in neighborhoods like Central City, Treme, and Pigeontown. These clubs, patronized almost entirely by locals, nurture a resilient blues and rhythm-and-blues scene that is often overshadowed by the Crescent City’s legacy as a jazz town. They are an essential part of New Orleans’ cultural history, but they are struggling—because of the recession, the aftermath of Hurricane Katrina, and potentially the BP oil spill.

This hour-long music-rich documentary features four talented musicians: Tommy Singleton, a vocalist who until recently drove an oyster truck for a living; John T. Lewis, a former appliance repairman who now plays R&B guitar full-time; Ernie Vincent, a bandleader and guitarist who learned to play at the neighborhood fish fries of his childhood; and Deacon John Moore, a bandleader and guitarist who played on hundreds of R&B recordings in the 1950s and ’60s. Also interviewed are bar owners Betty Fox (Mother-in-Law Lounge) and Guitar Joe Daniels (Guitar Joe’s House of Blues), along with other veterans of the city’s music scene.

The program takes readers back into history. They’ll visit bars like the Dew Drop Inn, with its female impersonators and all-night jam sessions, the Green Room, with its smells of spilled liquor and spittoons; and the Sportsman’s Lounge, where an underaged Deacon John witnessed police raids and back-room gambling.

If you live anywhere near New Orleans, or if you’ll be visiting this weekend for Southern Decadence, pull yourself away from the city’s other offerings and treat yourself to some of its blues and R&B. This will be a banner weekend for music.

As a part of our research, we were honored to interview Bethany Bultman, co-founder of the New Orleans Musicians Clinic. Since 1998 the clinic has been keeping the blues (as well as jazz, gospel, R&B and any other music you can think of) alive in New Orleans by giving the city’s musicians the medical care they need. In August of this year the clinic will lose the government funds that make up 90 percent of its operating budget, threatening its ability to continue this care. Please watch this video, share this video, spread the news and help out as much as you can.

DJM from Barry on Vimeo.

Deacon John Moore (above) shows off some blues licks backstage before a private gig at Harrah’s casino in downtown New Orleans. Deacon John, the 68-year-old president of the Union of New Orleans Musicians, is at his heart an R&B and blues artist: He performed at the Dew Drop Inn, a legendary black music club/hotel/restaurant in New Orleans until the late 1960s, and played as a session musician on many of New Orleans’ great rhythm-and-blues recordings before the British Invasion. He plays a mean slide guitar, producing an achy sound that could have emerged straight from the Mississippi Delta. 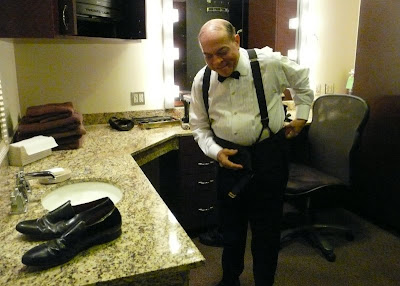 But Deacon John—whose powerful voice borders on operatic—long ago learned that most New Orleans musicians cannot live on pure blues and R&B gigs. That’s why he happily took on the moniker The Creole Chameleon. At the Harrah’s show, which honored the casino’s tenth anniversary, Deacon John and the Ivories performed everything from rhythm-and-blues to instrumental jazz to standards. By accepting invitations to perform at everything from weddings and funerals to the jazz club Sweet Lorraine’s, Deac has managed to make a better living than many of his peers.

In the video at 1:55, you’ll see Deac’s brother Charles Moore, a classical guitarist who also plays with the Ivories. The Moores are a musical family: Their mother, a devout Catholic, played both religious and classical music. The family staged a musical pageant in their home every Christmas, and with 13 children, there was always an infant to play the baby Jesus.