We were touched by WWOZ DJ Jamie Dell’Apa’s kind words about Still Singing the Blues, which aired Tuesday night on New Orleans’ community radio station. In his blog, Dell’Apa described listening to the show while driving home from Baltimore. Describing the musicians profiled in the documentaryâ€”Carol Fran, Harvey Knox and Little Freddie Kingâ€”he wrote:

Outside of the Europeans and WWOZ, these treasures are today’s “the invisible men.” Some unfortunate day, a hip obituary writer will tells us what we missed and the culture vultures turned necrophiliacs will hear the cue for a round of self-serving ex post facto tributes. Tributes that begs the question, “Where was the appreciation when these musicians were amongst us?” Ziglar and Yeoman’s documentary is that appreciation.

Dell’Apa interviewed us last January, when we were still researching the documentary.

Carol Fran from Barry on Vimeo.

When we caught up with Carol Fran, the blues diva from Lafayette was recovering from a mini-stroke. But that didn’t stop her from exercising her formidable pipes. Fran will be recording several tracks on a compilation CD next week, and the night of our visit she had a rehearsal with harmonica player Andy Cornett and guitarist Marty Christian. Both men play with Henry Gray & the Cats. (see the post below.)

Fran grew up in an English-speaking family, but some of her relatives spoke the Creole French often heard in the bayou country of Southwest Louisiana. She spoke French with those family members, and is equally facile with the blues in both languages. 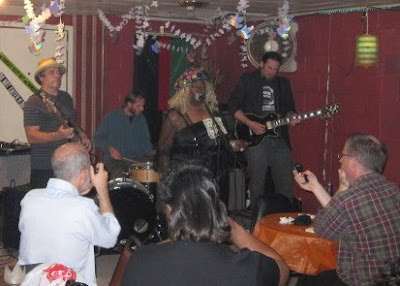 As Richard records and Barry photographs, blues and R&B diva Carol Fran entertains her loved ones at her 76th birthday celebration. Becky Owens took this photo at Cruiser’s, a small cinderblock bar on the old Breaux Bridge Highway in Lafayette, Louisiana.

To appreciate what a treasure Carol Fran is, listen to her song Emmett Lee, which she recorded in 1957 for the R&B label Excello. She’s been singing ever sinceâ€”her swampy voice dazzles in both English and Frenchâ€”reaching her professional apex after she married Clarence Hollimon in 1983 and began performing with accomplished blues guitarist from Houston. Notes the Texas State Historical Association:

Though the two had initially met around 1958 in New Orleans at the famous Dew Drop Inn, it took a chance crossing of paths some twenty-five years later (at a blues jam in a Houston nightclub) to make them a couple. That union, which billed itself professionally as Fran and Hollimon, eventually evolved into what was likely the most widely traveled and recorded husband-and-wife blues duo in Texas history. During that time they not only played marquee concert halls in numerous cities overseas, as well as major festivals nationwide.

Here’s a video of them performing at the Chicago Blues Festival (Fran comes in at 2:55):

Hollimon died in 2000. Fran moved home to Louisiana and has grieved her husband ever since. She has also suffered a stroke and several other medical setbacks. Still, in her Lafayette living room, she serenaded us with soulful, funny, and heartbreaking stories of her life, which we plan to feature in the documentary. And her hip-grinding performance at Cruiser’s demonstrated that she’s still got both the pipes and the charisma.