If you’re anywhere near New Orleans this weekend (sadly, we won’t be), don’t miss The Crescent City Blues & BBQ Festival, a two-day event in Lafayette Square Park (580 St. Charles Ave.) sponsored by the New Orleans Jazz & Heritage Foundation. This is a chance to catch freeâ€”yes, freeâ€”performances by the likes of Buddy Guy and Irma Thomas.

You also might catch musicians you’ve never heard ofâ€”talents such as Ernie Vincent, a guitar powerhouse who is better known among R&B record collectors in England than he is in the United States. Here’s a cut from Vincent’s Grammy-nominated 2009 CD Bayou Road Blues, an album of acoustic Louisiana Delta blues. Just click the “play” button on the widget below.

The non-profit Sweet Home New Orleans, which provides services to 4,500 musicians, has issued its 2009 State of the New Orleans Music Community Report. Among the findings:

The report is available on the organization’s home page. 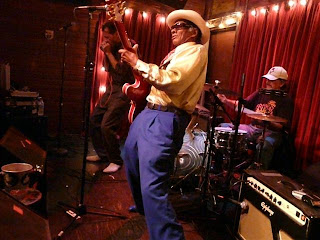 Barry writes:
I’m back from a brief trip to New Orleans, where I did some advance work for the documentary. Along the way, I went to see bluesman Little Freddie King at d.b.a., a small music club on Frenchman Street in the Marigny Triangle.

Last year, Michael Hurtt wrote this about King in Offbeat Magazine: “In these dark days of dilution, when even Hollywood action movie star Steven Seagal claims to be a blues man, this unfortunate phenomenon does have its upside: On the rare occasion that one stumbles upon the authentic article, in all its ragged, real-deal glory, the effect is shockingly immediate. And from his two-toned Stacy Adams shoes to his colorful felt Homburg hatâ€”to say nothing of his gritty guitar and vocal stylesâ€”New Orleans’ Little Freddie King just that.” d.b.a., which attracts locals and visitors alike, is a long way from one of King’s first New Orleans gigs: the Busy Bee, a now-defunct Perdido Street bar that was notoriously nicknamed the Bucket of Blood. But the savory surroundings didn’t stop him from playing a gutbucket blues so visceral that you can hear his hard life unmistakably in the guitar licks. The floor shook. People pressed close together. Couples danced intimately, spurred by the rawness of the tunes.

When King first left the Mississippi Delta in the ’50s, “New Orleans blues was truly an 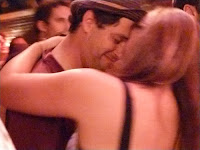 underground phenomenon, a back alley world,” Hurtt writes. Its practitioners’ styles “may have originated other places, but were somehow uniquely New Orleans, shot through with an urban electricity that could have come from nowhere else.” These days, straight-up blues are an increasingly rare phenomenon in New Orleans, which is better known for jazz and R&B. Little Freddie King continues to play the real thing.

Barry created this audio slideshow last year from his own photos, in conjunction with another project. It shows the many ways music suffuses daily life in New Orleans, while reminding us of the recovery work that remains. Music: “Raining in New Orleans” by Slewfoot and Cary B., from the album of the same name. Used by permission of Music Maker Relief Foundation and available here.

We have embarked on an ambitious radio project documenting the lives of older blues and R&B musicians who continue to perform in the face of poverty, ill health, and a devastating hurricane. Our one-hour documentary, tentatively called Still Singing the Blues, will burrow deep into the lives of these artists, whose music forms the bedrock of American popular culture but who remain virtually unknown outside their local communities.

This documentary is sponsored by Filmmakers’ Collaborative and financed, in part, by a generous grant from the Louisiana Endowment for the Humanities.