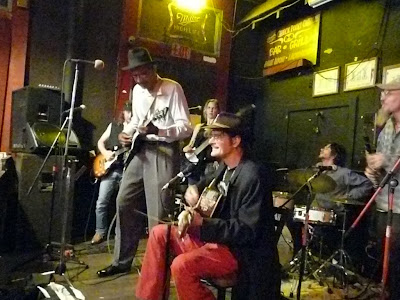 Barry writes:
During the week of the 2008 New Orleans Jazz & Heritage Festival, I was in the Crescent City on an assignment: to spend a week wandering through the city’s music scene without ever once listening to jazz. The article was eventually published on the online travel magazine World Hum. You can read it here.

One night I stopped into Check Point Charlie, a 24-hour lounge that doubles as a laundromat. (The bartender sells detergent along with Abita Amber.) I took a seat at the bar, where a gray cat ate from a martini glass. Above me hung mannequins dressed in lingerie and Mardi Gras beads.

The night’s billed musician was Slewfoot, a rail-thin blues guitarist wearing tight red pants and a fedora. Slewfoot (top photo, sitting) plays from experienceâ€”he has weathered hepitatis, triple-bypass surgery, and (long ago, he notes) heroin addiction. He has performed on the streets of New Orleans for 30 years. Performing with him was Alabama Slim (top photo, standing), a towering 70-year-old who has played the blues all his life. As Alabama Slim said in an interview:

I grew up listening to the old blues since I was a child. I spent summers with my grandparents who had a farm. Them old folks would get to moanin’ while they worked, and I just started moanin’ with them. That’s where I learned to sing. When I got grown I formed a band and we played little juke joints in the ’50s and ’60s. In ’65, I came to New Orleans after Hurricane Betsy. Got me a job with a moving company and then one making cooking oil. My cousin Freddie King was drinking hard in those days, and I was too. We jammed every once in awhile.

That night, Slewfoot, Alabama Slim, Cary B, clarinetist Nervous Duane and others belted out an opening set of raucous, swampy, good-time blues that alone would have sent me away happy. But then, during the second set, an unannounced guest joined the band: Little Freddie King (bottom photo, left), Alabama Slim’s distant cousin and one of region’s last great country bluesmen, freshly home after his post-Katrina exile. That night King played a back-alley blues so visceral that I could hear his hard life unmistakably in the guitar licks.

What brought Slewfoot, Alabama Slim, and Little Freddie King together was their affiliation with Music Maker Relief Foundation, a North Carolina-based organization that supports older Southern musicians living in or near poverty. Music Maker has produced several Slewfoot albums, the best of which is Rainin’ in New Orleans, as well as a collaboration between Alabama Slim and Little Freddie King called The Mighty Flood. (Another King CD is in the works, and it’s splendid in its unpluggedness. Stay tuned.) In the audience at Check Point Charlie that night was Tim Duffy, Music Maker’s founder.

It was a great show. If you’re in New Orleans for New Year’s Eve, you can hear these three musicians play together again. Same place: Check Point Charlie, 501 Esplanade Avenue, 9 p.m. 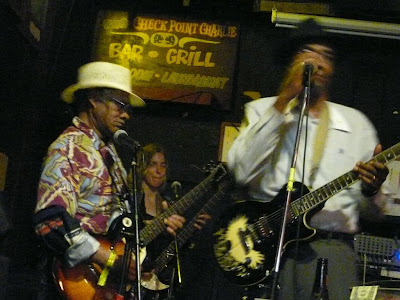