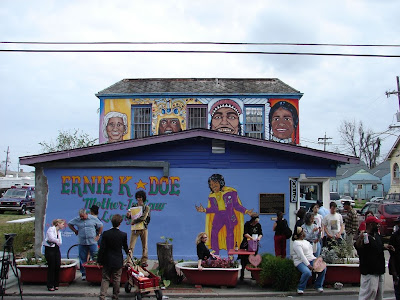 When we visitied Louisiana last month, many musicians fondly recalled Ernie K-Doe’s Mother-in-Law Lounge, which opened in 1994 and remained open regularly until K-Doe’s widow Antoinette died this past Mardi Gras Day. The K-Does were beloved figures in New Orleans. After Antoinette’s death, folklorist Ben Sandmel (who is writing a book about Ernie and also serving as a consultant on our project) described the lounge to The New York Times:

There were elderly black couples from the neighborhood, grunge kids with green hair and busloads of blue-haired ladies from the suburbs. Antoinette made everybody feel equal, at home and comfortable.

There have been many colorful descriptions of both Ernie K-Doe and the Mother-in-Law. One comes from New York Times columnist Rob Walker in his book Letters from New Orleans:

Back in the 1950s and early 1960s, Ernie K-Doe had some R&B hits, “Mother-In-Law” (from 1961, written by Allen Touissaint) being the biggest. It still gets played on oldies radio, and if you heard it, you’d recognize it. Like a lot of black musicians from that era, he never really saw a big financial payoff: he faded from the scene, battled alcoholism for a long time, literally wandered the streets in a haze. Later he had a stint as a radio DJ, and would play music between lengthy, erratic soliloquies that focused on himself and his career, and often concluded with the emphatic declaration ‘I’m cocky, but I’m good!” or the equally spirited self-exhortation, “Burn, K-Doe, burn!” Sometimes that station still plays recordings of these stream-of-conscious monologues, and they’re amazing; people actually collect them.

Finally he met and subsequently married a woman named Antoinette, who apparently helped him clean up his act and mount a comeback of sorts. Ernie K-Doe’s Mother-In-Law Lounge opened in 1996.

Walker continues with a description of the Lounge’s interior:

The main room contained a bar, about a dozen old tables. a red-and-blue carpet, all of it looking rather worn. There were many, many photos of K-Doe at all stages of his career, some with Antoinette and her cousin Tee Eva, who sang back-up for him as the Paradise Ladies. There was also a life-sized mural of K-Doe looking beatific. The old K-Doe posters included one promoting a 1950s Dew Drop Inn show. There were also some vague proclamations from the City Council, and a number of fancy parasols hanging upside down from a clothes line. On one visit the decorations included a proposed recording contract that K-Doe found offensive, its pages displayed individually; he went on at great length about this evil document that night. A more recent addition was a mannequin that a local artist transformed into a K-Doe statue, dressed in one of his spangled suits; it contains a tiny transmitter that broadcasts a short. repeating tape loop of K-Doe yelling things like “You know you don’t look good as I!” and “I am the star of New Orleans!” You can hear it at 1500 on your AM dial, if you are within about 50 feet of the statue.

A second and even more worn-out room (later renovated) included a couch and a television set blocked off in the corner. Although almost every time we visited there was loud live music in the front, back here the set was always on, with the sound down, and there was an old, tiny, and nearly bald woman sleeping, or at least lying under covers, on the battered couch. as if a wall had fallen away to reveal some neighbor’s private living room. This was Antoinette’s motherâ€”that is, Ernie K-Doe’s mother in law.

After Antoinette died, Josh Levin wrote an article in Slate recalling his own visit to the Mother-in-Law in 2000:

The high point of the evening was a new tune called “White Boy/Black Boy.” Halfway through, he asked all the black people and white people to join hands. In that small room, full of autographed Ernie K-Doe pictures, Ernie K-Doe articles, and a life-size Ernie K-Doe mannequin, we achieved something close to racial harmony. K-Doe, then 64, pledged that he would soon perform the song at the Superdome, resurrecting his career and ending New Orleans’ racial problems with one grand gesture.

Here’s a video of R&B legend Allen Toussaint at the Mother-in-Law Lounge, photographed by the pseudonymous “Catnola.” The video comes from last summer, when Toussaint, Ernie K-Doe and Benny Spellman were inducted into the Louisiana Music Hall of Fame. (Yes, Toussaint did write “A Certain Girl,” along with “Mother-in-Law.”)

These days, the K-Does’ daughter runs the Mother-in-Law Lounge, but it only opens occasionally. You can find Ernie K-Doe buried at New Orleans’ St. Louis Cemetery No. 2. Writes Walker:

The tomb of Ernest Kador (that’s K-Doe’s real name) is relatively modest, though it has lately been spruced up a bit. There’s a plaque that identifies him as the “Emperor of the Universe.’ which is how he referred to himself. It continues: “Along with the ‘Star Spangled Banner: his signature R&B classic ‘Mother-In-Law’ will be one of only two songs to ultimately be remembered” This, too, is a variation on something that K-Doe said, often. “His wake and funeral,” the plaque reads, “comprised the most spectacular send-off New Orleans has ever experienced.” Actually, there’s some truth in that one.

Above photo by Howie Luvzus, republished under a Creative Commons license.