The blues didn’t evolve in the rarefied atmosphere of festival stages and concert halls. The music was played on grocery store porches, at family hog slaughters, and inside neighborhood drinkhouses. It was local, and it was personal. 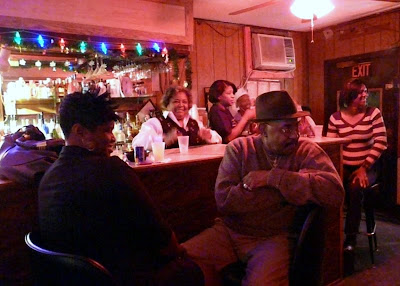 That’s why the place to be Sunday night was a New Orleans bar aptly called The Place to Be.

The Place to Be is located on a non-descript commercial strip on Claiborne Avenue in the city’s Central City neighborhood. An employee unlocked the front door to admit us, and once inside, we were immediately welcomed as if we were old friends in a family rec room. The ceilings were low; Christmas lights hung over the bar; and red light bulbs filled the ceiling-fan sockets. Several women dished out large places of ribs with red beans and riceâ€”free to customers on Saints game days. 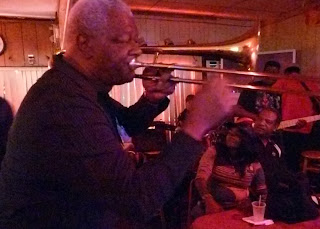 Sunday night’s gathering was a celebration of trombone player Doc Lewis’ birthday. A musician who played with James Brown’s band, Lewis (left) is now a fixture on the streets of the French Quarter. In keeping with local tradition, well-wishers pinned dollar bills onto Lewis’ shirt as he got ready to play an electrifying set. He was joined by some top-flight musicians, including blues guitarist John T. Lewis (below, red shirt), who has played with R&B legends like Jean Knight (“Mr. Big Stuff”) and Ernie K-Doe (“Mother-in-Law”); Robert “BJ” Harvey, the bass guitarist for Soul Queen Irma Thomas; keyboard player Jake Francis; and crooner extraordinaire C.P. Love (bottom photo), who has opened for the likes of B.B. King and whose voice filled the room with a tangible charge. When the drummer, Tokyo native Miyumi Shara, was introduced, a table full of women in Saints T-shirts shouted, “Sister!” 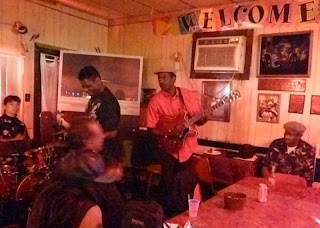 This was a bar full of friends celebrating the birthday of one of their own, and the music sizzled with an emotional intensity born of that intimacy. Customers leaned into the musicians to whisper requests; they danced at their tables; they threw their heads back in laughter as Doc Lewis wove this way through the bar playing his trombone in the faces of his loved ones. They traded good-natured banter with the trombonist about how many weeks one properly celebrates a birthday. A bartender recruited several patrons to carry in even more food from a waiting car. A big screen in back broadcast a series of sporting events, but no one paid attention. The party was up front. 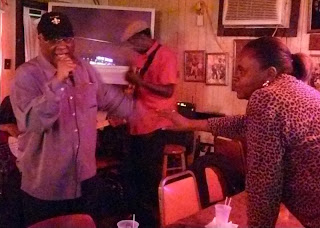 Two days later, John T. Lewis told us that The Place to Be reminds him of the bars he started playing thirty years ago. “If you could imagine: Smoke-filled room. You walk in there, man, and you know it’s going to be great because of the excitement in the air and the anticipation of the audience. I would actually look for a particular type of place that had a certain smell. It’s the aroma of what was about to happen.” What was that smell? we asked him. “It was spitoons,” he said. “And liquor. Old spilled liquor on the bars and beer and cigars. And smoke. And stuff.”

“We would play in those places until our fingers bled,” he said. “We didn’t want to leave.”

We would not have discovered The Place to Be if not for our scheduled interview with John T. Lewis. The gig was not listed in the WWOZ community calendar or the alternative newspaper Gambit. New Orleans has fewer of these neighborhood bars than it used to, where neighbors could gather to hear blues and R&B in a true community environment. But they’re still out there, providing as authentic a blues experience as one could imagine in the Crescent City.